THIS BLOG HAS MOVED.

Please head on over to my new blog

I kept my most popular post on here for your viewing.

Posted in Anja Marais's art and exhibitions | Leave a comment 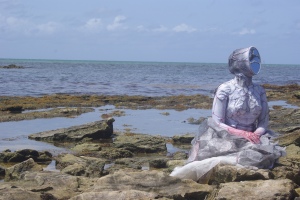 Still from the stop animation "SHIFT"

In “Shift,” a wild dog steals the face from a figure born from a tree. It’s a short film collaboration by South Florida artists Juan Carlos Zaldivar and Anja Marais.

After someone working with Miami International Film Festival saw a working cut of the film, the filmmakers were invited to enter MIFF’s short film competition.

But in order to complete the film, the artists need more funding so they turned to micro-funding site IndieGogo.

HuffPost Miami spoke with Marais, who hand-sewed all the film’s characters and animals out of paper.

What was the inspiration behind Shift?
I’m originally from South Africa and Zaldivar is originally from Cuba, so we draw extensively from our experiences as immigrants. I’m concerned with “the perpetual outlander” always reaching for the unreachable.

Zaldivar’s work is often informed by our relationships with our bodies and by the transmutations and transcendences of the physical. Together, we have crafted a highly original, visual symphony that uses beautiful time-lapse photography and relies completely in film language to weave a haunting tale of loss and redemption.

How did you and Juan work together on the film?
Zaldivar has an extensive film background and I’m a sculptor from the Visual Arts genre. We both came together with very different approaches.

We both wrote the script, we both were models for the filming, and we both share in the labor around making stop animation.

Individually Zaldivar brought his knowledge and the filmmakers eye to provide the film with structure and flow while I provided sculptures and artwork to capture the emotions of the characters.

How does this film fit in with the rest of your work?
Before becoming a professional director, Zaldivar started his film career as a sound editor and designer, his work can be heard in Academy nominated films such as Ang Lee’s “Sense and Sensibility”, in Nanette Burstein and Bret Morgan’s “On the ropes” and on HBO’s America Undercover, for which he garnered an Emmy nomination.

For me, this short film breathed life into my sculptures. I hand sewed paper together to form three-dimensional figures to emphasize their fragility. This became part of interdisciplinary projects consisting out of sculpture, photography, installations and now film. These projects are an ongoing documentation that the journey and foreigner exists in all of us.

I have been taught firsthand by Japanese master papermakers on how to make and work with paper. You can see in the film “Shift” that all the characters are hand sewn out of paper.

Where was this filmed?
“Shift” was filmed outdoors in the Florida Keys. We found hidden, almost untouched areas on the Atlantic coastline, between mangroves and seaweed we managed to give nature an important role in our film.

You can read the full article at:

If you enjoy the trailer for our stop animation “Shift” please help us by supporting this project. You can learn more how by visiting our fundraiser page.

You can also read more on my previous post.

Murakami – Words to create by

It has been a few months since I updated my blog..my latest project has become so involved in so many levels of my life that I just sunk away in it. But more about that later. Some words by one of my favorite writers…

In other words, the role of a story is to maintain the soundness of the spiritual bridge that has been constructed between the past and the future. New guidelines and morals emerge quite naturally from such an undertaking. For that to happen, we must first breathe deeply of the air of reality, the air of things-as-they-are, and we must stare unsparingly and without prejudice at the way stories are changing inside us. We must coin new words in tune with the breath of that change.”

One of my favorite writers from South Africa is Jan Rabie. His work is written in Afrikaans and can be very political but he is also known for his surrealistic stories.  I wanted to share his most famous short story “Die drie kaalkoppe eet tesame” with you but could not find it in English. Please note that this is an unofficial translation done by me and I hope that it is not a disservice to Mr. Rabie – the power of the story is so much deeper in its native tongue. The message is universal and still very relevant today… we feed the greedy and we enable the corrupt.

A trinity of bald heads sit around a table. The lights of the restaurant glows metallic on their bald polished crowns. It is reminiscent of egg shells, cracked open to monstrous miscarriages of shaking cheeks and mouths. The bodies of the bald heads are enormous and swollen dwarfing the three pairs of little legs skipping hungrily under the table.

A long thin waiter in a black tuxedo served them with all the dishes that they need. Their multiple folded chins flap up and down while they hastily gobble down beef fillets, and when they lift their glasses of wine to their red and eager mouths gaping under their bulbous noses, their eyes disappear into the folds of their cheeks.

The skinny waiter served them in silence. Dish after dish he brings and place it in front of them. He shows no emotion in front of his clients, but other people in the restaurant was surprised by the eating of the three bald heads, and left their own tables to stand in a circle around the three.

The three bald heads swing up and down in the tumultuous speed that they are eating. And while they eat faster moaning of impatience in between their mouths being plugged full with flying hands, something strange starts to happen: The moment a dish is placed in front of them its contents take shape of human forms: arms, legs, virgin breasts , and even an infant crown, cooked all rosy.

The onlookers gasped in disgust, but the three bald heads saw nothing of it. They eat with disturbing greed, they even forget to wipe off the streams of fat that flows over their cheeks. They grant themselves no pause between each new piece of human flesh, their mouths pulverize like meat grinders.

The skinny, silent waiter is always on time with the next dish. But the three bald heads seem to be blinded by their dizzying effort and from all the sweat running into their eyes: they can no longer discern the circle of spectators from the dishes that the waiter is bringing. One bald head mistakes a young girl for an overcooked chicken, and when he plunged his fork into her to lift her to his plate, he tore her limb from limb. The second bold head chopped a man near him neatly in half, the third open his mouth so wide that he bit a screaming woman’s head right off. The crowd fled in horror, the restaurant runs empty.

The three bold heads ferociously pursue their dinner. Their hands flying left and right to feed their salivating mouths. Their eyes drowned under the bulk of their cheeks, no longer able to see the dishes the waiter is carrying, they bit their own fingers off and tore large chunks of meat from each others bodies.

The table and chairs tumbles over and the gala dinner continues in twitching disorder on the floor. The bodies start to disappear into the swirling of the blurry mouths. Nothing is left on the floor, except the three bold crowns glowing white like cracked open shell eggs.

Then the waiter wipes the floor. He throws the three bald crowns in a garbage can where they look like rotten pumpkins. He sets the table in silence for the next day’s meal.